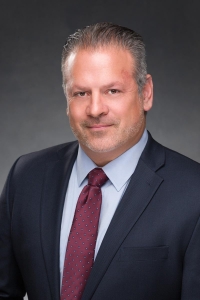 Where are you originally from? I was born in Cleveland, Ohio and my family moved to Las Vegas in 1978. So, while I wasn’t born in Las Vegas, I do feel like a native.

What has NAIOP provided you that has helped you grow professionally or personally? Along with a huge network of contemporaries and multiple educational programs that have been incredibly useful to my career, NAIOP has provided me the opportunity to become a more effective leader through participating in and now Chairing one of the committees. This experience has allowed me to push myself to be a better leader and find new ways to work with people from different markets and communication styles.

What has been your favorite experience? When I first was a member and very new to the industry, I attended a NAIOP lunch event that had Mayor Oscar Goodman as the key speaker. Growing up in Las Vegas is different than just about anywhere else I would think, and it just so happened that Mayor Goodman was my first little league coach. When I went up him to say hello at the event, he pulled me aside and told a story to the entire room of about 200 people that during our first game he told me to go play left field and I spent 5 minutes running around the field before coming back to him to ask, “Where is left field?”. He has never let me live that one down. The positive thing that came out of it though was he had introduced me to every single person in the room and several contacts I made that day are still close friends of mine.

Who Have I met or become closer friends with at NAIOP: There have been several people that I have heard speak or met that have been major influences in my life. Most recently, I was at an event were Frank Martin was speaking about his history with the construction community and I never forgot about how much he spoke about his commitment to his family and how he saw the people who worked for him at Martin-Harris as a part of that family. About a year later, I had the opportunity to be a part of that family and what he said played a major role in why I decided to join the Martin-Harris family.

What do you want your legacy to be in the Southern Nevada community? I want to be someone that has made an impact by educating or mentoring the next generation both inside of NAIOP and in the Southern Nevada community. I have been very fortunate to have had several people that I still refer to or meet with regularly that have been major influences in both my personal and professional life. If I am able to do the same and then they continue to do so with future generations then I will feel that I have accomplished something great for the next generation and beyond.

Click here if you’d like to submit a member highlight and return the completed questions and submit your headshot to newsletter@naiopnv.org.